If you’ve received a summons to attend at a Magistrates’ Court anywhere in England or Wales under Section 1 or 4B of the Dangerous Dogs Act 1991 (or you believe you are at risk of having these proceedings being brought against you) then don’t delay – speak to us now and we’ll give you preliminary legal advice. This is a FREE service. We will explain the law, tell you your options and you can decide if you would like to instruct us to represent you.

Phone us on 01304 755 557 and speak with either Trevor Cooper or Nik Starmer-Smith. If we can’t immediately speak to you please leave a message and we will call you back as soon as we can.

The Dangerous Dogs Act in 1991 proscribed certain types of dog so that owners only had a limited period of time to make possession of them lawful. That time limit has expired.

This law applies to the following types:-

The type of dog that has most commonly been the subject of cases has been the pit bull terrier. Possessing an unregistered pit bull terrier type dog is unlawful and if you have such a dog you are committing a criminal offence. If you think you have an unregistered pit bull type dog, it cannot be voluntarily registered (ie. at present there is no application you can make to register your dog) as the dog can only be exempted from the prohibition under Court Order after it has been seized. 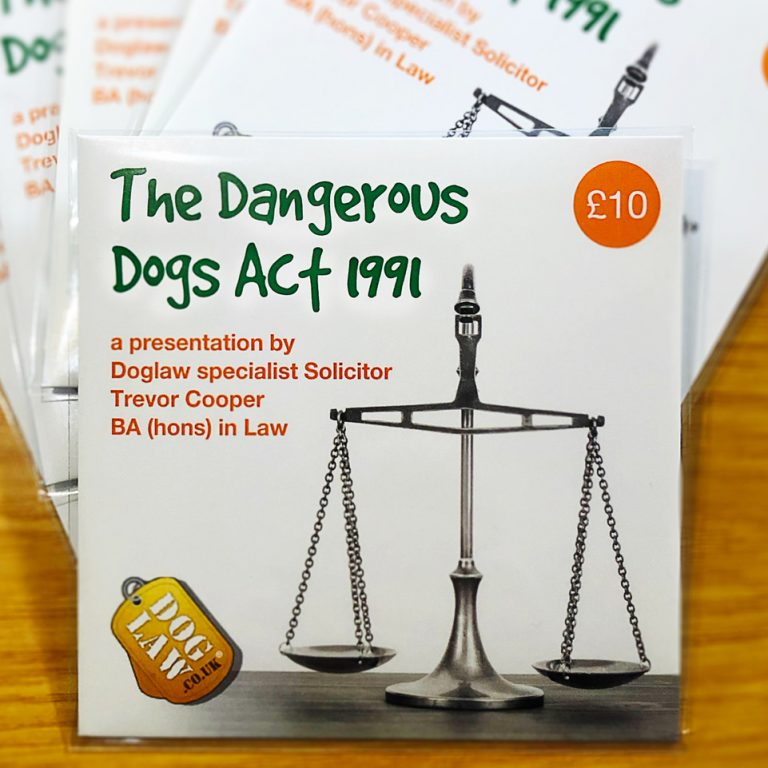 If you want more detail about the Dangerous Dogs Act 1991 Trevor Cooper has filmed a 65 minute DVD which is available from Doglaw Limited for only £10 (incl P&P).

More information can be found here.

However, even if you have an unregistered pit bull terrier type dog, you have a reasonable chance of avoiding a destruction order being made. You must prove to a Court that your dog is not a danger to public safety in proceedings brought against you (usually by the Police, but may be brought by a Council). Throughout this advice-note we shall only refer to the Police as they are most likely to bring a case).

There are currently over 3,530 dogs that are exempted from the prohibition ie. have been registered on the Index of Exempted Dogs. This represents more than a quadrupling since 2010. So despite what you may have heard, in thousands of cases the dog has been registered because the owner has proven it has a good temperament and the owner is deemed to be responsible.

If the Police believe that your dog is a pit bull type, your dog will be seized and may remain in a Police appointed kennel until the case is concluded. It is possible that the Police may allow the dog to be released subject to the conditions of the Interim Exemption Scheme (‘bail’) although this is entirely at their discretion.

1. The Police will have your dog examined by their expert(s) and if they conclude that your dog is a pit bull terrier type:-

(a) You could be prosecuted under Section 1 of the Dangerous Dogs Act 1991. At Court, unless you can prove that your dog isn’t a pit bull terrier type dog you will be convicted. Provided you qualify on financial grounds, you may be granted Legal Aid (a representation order), which means that public funding will pay for your dog to be examined by experts of your Solicitor’s choosing. Although the Act gives a maximum penalty of 6 months prison, the most likely sentence is that you will be fined (or given a conditional discharge) and ordered to pay costs. In theory you could be disqualified from having custody of a dog, but this is very rare. There is an appeal available to the Crown Court.

2. As to your dog, (if the case is proven under either Section 1 or Section 4B) you will need to prove that it would not constitute a danger to public safety, and if you can, the Court may allow it to be registered (otherwise it must be destroyed). You will have to pay for the registration fee, the neutering, microchipping and insurance. The dog will not be returned to you until all this is completed. Please remember that once the dog is returned then other conditions must also be complied with (see below).

What is a pit bull terrier type dog?

Section 1 and 4B of the Dangerous Dogs Act 1991 relate to dogs of the type known as the pit bull terrier.

The High Court has decided that for a dog to be a pit bull type, it must have a substantial number or most of the physical characteristics of a pit bull terrier. These characteristics are listed in a number of places, and probably the most comprehensive (and that generally relied on by Courts) is the American Dog Breeders Association’s Basis of Conformation for the American Pit Bull Terrier.

This is a functional standard which describes the ideal, and so the dog does not have to conform in every detail to be regarded as a pit bull type. Recent High Court rulings have clarified that a dog can also be exempted by the person for the time being in charge of the dog, which must be someone who has had responsibility for the dog in the past or present.

But I have a dog with a nice temperament. Surely this can’t be regarded as a pit bull type?

The High Court has ruled that the behaviour of a dog is relevant but not conclusive when determining whether a dog is a pit bull type.

Surely there is a DNA test that can be used?

Not at present. In any event, the legal test is predominantly on the basis of physical conformation so it isn’t just about the breeding but is about what the dog looks like.

No. Cross-breeds and mongrels could be regarded as pit bull types depending on their physical conformation.

How does the prosecution prove their case?

This reversal of the usual burden of proof in a Section 1 case has been challenged in the European Court, but has been found to be lawful. It is therefore very difficult to successfully defend a case but it can be done if the Court prefers the evidence of the defence expert.

Can a pit bull type dog ever be lawfully owned?

Owners were given a short period of time to have their dogs registered onto the Index of Exempted Dogs, but this form of voluntary registration ended in 1991.

Since 1997 the law has been slightly relaxed, so that the Court may allow the dog to be registered (and all of the other conditions must be complied with) but only if the owner can prove that the dog would not constitute a danger to public safety.

The Court must have regard to the temperament of the dog and whether the owner (or person in charge) is fit and proper. If this cannot be proven then the Court must order that the dog be destroyed.

What are the conditions of owning a pit bull type apart from having the dog registered?

The dog has to be neutered, microchipped and insured. It must be kept in secure conditions to prevent it from escaping.

You must notify the Index if the dog dies or is exported.

Also, no person shall:-

What would happen if any of the conditions are breached after a dog has been registered?

The dog would then become non-exempted and so it is a criminal offence and in addition to penalties for the Defendant there is a presumption that the dog shall be destroyed.

The High Court has recently clarified that a previously exempted dog can be re-exempted provided the dog would not constitute a danger to public safety and that it is to the owner or the person for the time being in charge of the dog.

Please note that the above summary only relates to the law in England and Wales.

You must not rely on it as constituting legal advice and so for specific guidance on your particular doglaw issues please contact us – see our “How we can help” section for details.